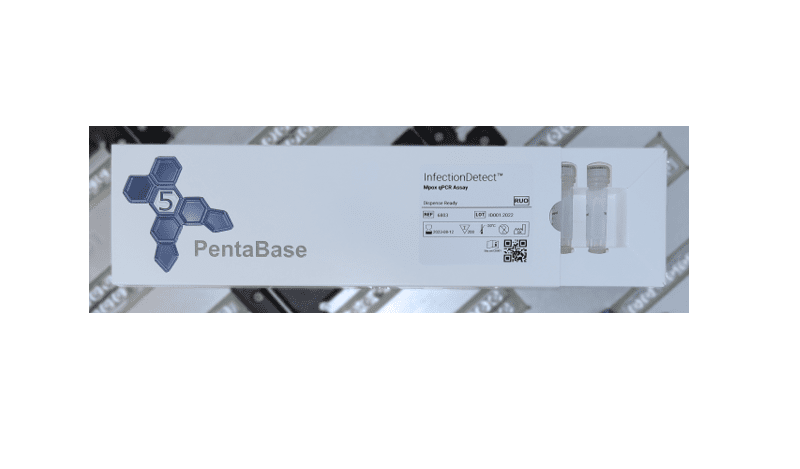 PentaBase A/S, Danmark, August 12, 2022 – Since early May 2022, an increase in Monkeypox cases has been reported from non-endemic countries. The virus has spread from West and Central Africa to North America and Europe. Such a significant number of cases has never been reported before.

WHO is trying to prevent the further spread of the disease by guidance and increased surveillance. Once again, PentaBase has responded quickly to the new outbreak, and designed and produced a qPCR assay, specific and sensitive for the analysis of Monkeypox, validated on Monkeypox DNA extracted from Danish citizens by Rigshospitalet.

”PentaBase are proud that we once again, in close collaboration with the leading scientists in clinical microbiology from Rigshospitalet, can react swiftly to a need in society. Our newly developed research analysis, InfectionDetect™ - MPOX Virus qPCR Assay, which detects monkeypox virus-DNA, has now been confirmed to work on virus-DNA found in human samples in Denmark, by Rigshospitalet. ” says Ulf Bech Christensen, PentaBase A/S Chief Executive Director.

InfectionDetect-MPOX qPCR assay from PentaBase is targeting two Monkeypox genome DNA sequences, J2R (HEX) and B7R (FAM), and the human RNAse P (Cy5) as a swabbing and amplification control.
The assay is for research use only. The two Monkeypox-specific regions have been validated in-silico against other orthopox viruses and have been found to be specific. The assay comprises positive and negative controls.

The analysis is developed on the BaseTyper™ real-time PCR instrument but will be validated on Bio-Rad’s CFX, Thermofishers’ Quant-Studio5 and Roche’s LightCycler480. Furthermore, the assay will be able to run on the fully automatic Cobas 6800 and 8800 in an open channel. The instrument time required for the analysis is 51 minutes when using a BaseTyper™.

For purification, we recommend the Viral RNA and DNA purification kit for the BasePurifier™, but other viral purification systems such as one from Biomerieux have also shown to work.

The assay can be delivered as Ready-To-Use (RTU) or Dispense Ready (DR). In the RTU, we deliver pre-mixed assays in plastic chosen as the basis of your PCR machine. In the DR version, you mix the primer/probe mix and the mastermix into your own plastic tubes.

We are a Danish, science based company which for more than 10 years have developed PCR-based products for scientists and medical professionals who explore new treatments and help patients worldwide. Our products are based on our own technology, Intercalating Nucleic Acid (INA®).

PentaBase is based in the heart of Denmark, Odense, and our science has been used to better the treatment planning of cancer patients worldwide. Luckily, we were able to utilize our science when the Corona pandemic hit Denmark, and we delivered approximately 50 % of the total number of PCR-tests in the first 6 months of the pandemic.

" alt="PentaBase and TDF Icon on top">